How Croeso Menai welcomed a Syrian family to North Wales

How Croeso Menai welcomed a Syrian family to North Wales

We are a little team of volunteers near Bangor in North Wales, called Croeso Menai – and we have just welcomed our first Syrian refugee family into our community. It has taken us 3 years, patiently setting ourselves up as a charity and applying to become a community sponsorship group, organising fund raising, and getting permission from the Home Office and local council. At times, the bi-weekly meetings seemed tedious and futile, but we persevered with our commitment to the cause. 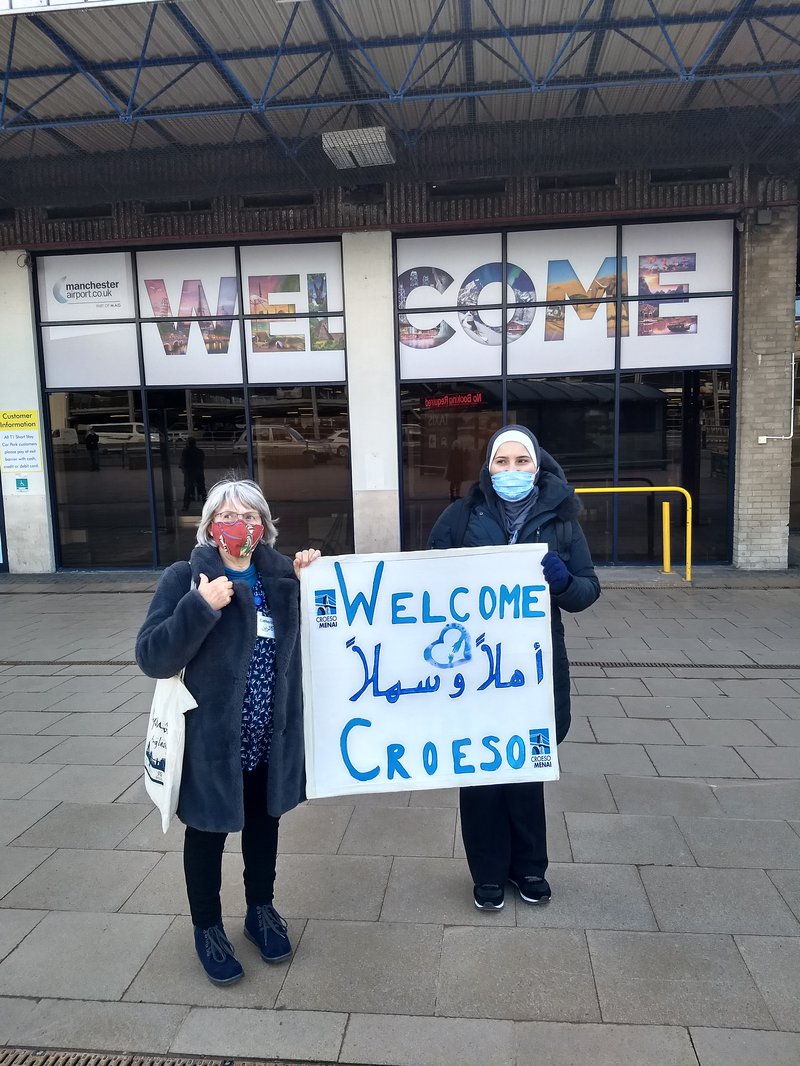 The group had to commit to raise £9000 to be able to support the family for the first 2 years of their re-settlement, which seemed daunting at first, but we soon found to our delight that each fund-raising event was well-supported, and the money came in with ease. This is a sparsely populated area and ranks in the lowest quintile of most social deprivation indexes, but it is also a tightly knit community in which people are keen to get involved in social projects. The generosity of our supporters and their belief in our cause has been very encouraging and inspiring.

At the very beginning we were offered some training by Citizens UK in which we were told that this is not just about helping a vulnerable refugee family, it is also about making connections in local communities and building networks. Although I was not sure how this would happen, I now believe that it is this aspect which is in fact most powerful: the local university, churches, choirs, other organisations, and individuals were soon asking us if they could do fund-raising on our behalf. The task of bringing one family to safety is both specific and achievable, compared to trying to digest the constant barrage of horror in the media about millions of displaced people. Moreover, this process gained steam when we began to look for a house to rent and furnish. Although we could only afford to pay a very modest rent, we were able to find first one house, then another, and fill it with furniture, almost as soon as we were ready. We had people offering to make curtains, buy blinds, donate freezers and tumble driers, and give stacks of children’s toys and clothes. Of course, this is only possible because most of us are living in relative ease with enough material wealth to be able to pass on lots of second-hand goods. Nevertheless, it is very life-affirming and humbling to encounter people’s kindness in this way; it often seemed that we only had to ask for something and it would be offered three times over.

It took us two years to put everything in place and after the Home Office had given us the go-ahead, we were particularly busy. Despite the onset of Covid-19 we were still expecting to go to Manchester airport in March last year to pick up our family, when at the last moment, the night before, the Jordanian borders were shut, and all flights cancelled. This was a big shock and disappointment for us all, and we worried about whether they would ever make it out, or indeed if any one of us would become too ill to see the project through to fulfilment. After a few months, as the pandemic was getting worse, we emptied the rented accommodation and put everything in storage. The next six months were a blur of Covid concerns and anxieties, until November when we at last heard from the Home Office that the resettlement process was restarting. We had to find another cottage quickly, which we were lucky enough to do in a small village outside of Bangor, but which needed new flooring and to be repainted.

The process of equipping a second cottage has provided another opportunity for locals to demonstrate their generosity. As the villagers noticed our comings and goings, they became interested in our cause, and keen to offer further support and encouragement. When the family were due to arrive, everyone was so excited that we had to constantly remind people that the family would need to quarantine at first and might also be quite overwhelmed. Nevertheless, gifts, of cakes and flowers and food were delivered throughout the first few weeks and continue to be brought.

Our little team organised garden visits in the first few weeks, and when quarantine was over, we started taking them into town to the optician, dentist, GP, and bank. We are now doing daily house visits to teach English and to explain how things work in the UK. In this area, children are educated in Welsh and English, so we are now starting to introduce some Welsh phrases and the oldest boy will soon be starting a Welsh medium primary school.

Although the last year of Covid restrictions and anxieties has been hard for many of us, this has been partly offset by the opportunity to be part of something so positive and life affirming. The reality of welcoming a refugee family and assisting them to start a new life in the UK has been empowering for the whole team and encouraged us to share our knowledge and skills in useful and creative ways. We are extremely fortunate to have three Arabic speakers in our team, two of whom also came to this country from Syria; we also have three English teachers, as well as others who are good at managing finances, sourcing donations, maintaining a social media profile, and organising appointments. All these functions would be too much for one person or even a small handful, but ten or eleven seems to be enough to make things run smoothly. We also have a wider team of supporters who are happy to make and buy things, and provide an endless supply of bikes, books, and clothes.

The fact that the family have a team of well-connected local people sponsoring them for two years means that they are much better supported than some families might be moving into a new area; they have an abundance of advocates many of whom have also experienced and lived through various issues that might arise. This gives the family access to insider perspectives and means that they have a range of opinions and strategies to consider. In this way, it seems to me, the community sponsorship scheme gives families the best start to allow them to thrive in their new surroundings.

There may of course be many challenges and hurdles to overcome before the family are properly integrated and can feel at home here, but at least they, and we, have started out with a very positive attitude towards this adventure. It is only one family that we are helping but if one small village in a rural and relatively deprived area of Wales can do this so smoothly, it seems likely that this process could be replicated in villages throughout the UK. Each village community benefits from the opportunity to make a real difference to someone’s life and if there were 20,000 villages that did this, the entire country would benefit.